Kwame A Plus, a Ghanaian politician and former artist, has launched a new attack on Feli Nuna, a female vocalist, weeks after their ‘dirty’ battle in the United Television studio.

As previously reported by Mzzta Kendrick, the two personalities were caught in a live broadcast brawl in which A Plus used unreadable comments on Feli’s boyfriend, a move that enraged the singer, who also slammed the entertainment pundit.

Just when it appeared that the issue had been put to rest, Kwame took to Facebook on June 11 to criticize a female singer who, he said, had failed to produce a hit despite the hoopla and media attention he allegedly generated for her during their recent encounter.

Despite the fact that he did not specifically mention Feli Nuna, social media users who commented to his post said that the description he gave about the individual perfectly fit her.

Kwame A Plus Quoted “Your song could not hit after everything I did for you on UTV. Stiiiil even your mother doesn’t know that you have a new song. Ungrateful girl. Madam, your problem is spiritual. Stop running desperately from media house to media house. You should be in a prayer camp casting out demons from your life by now. I’m only posting this to see if I can help you trend. You can also respond. Maybe so 2 by 4 media houses will start talking about you.” 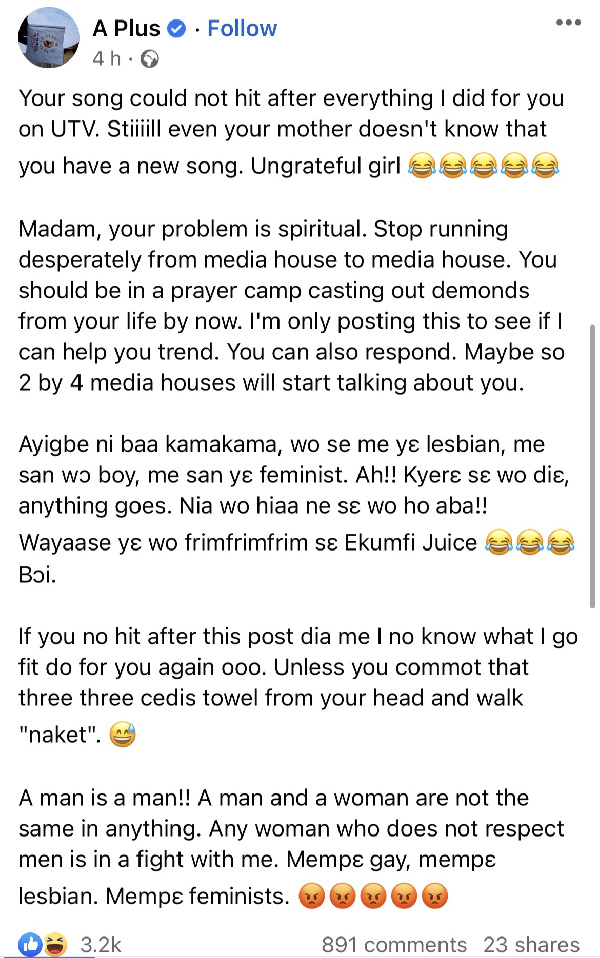